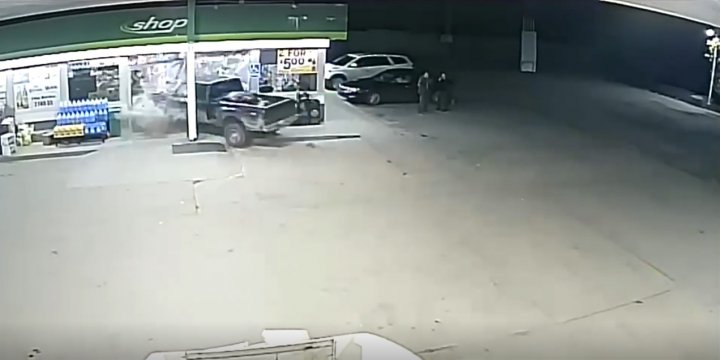 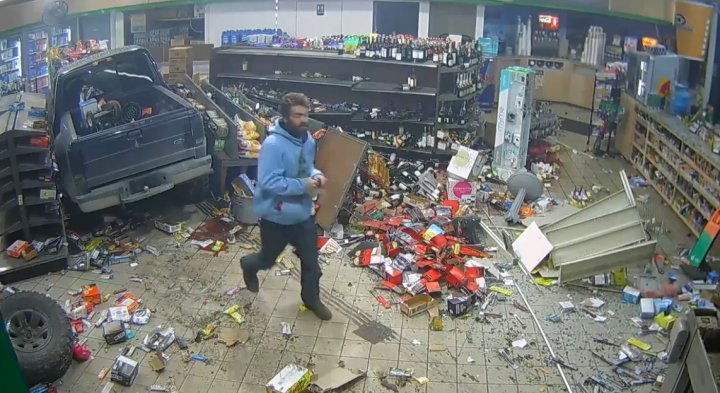 ORTONVILLE (WJRT) (10/25/2019) - A 24-year-old man who was trying to spin the tires on his pickup truck crashed into an Ortonville gas station instead, then fled after taking his license plate, police say.

Surveillance video from inside the BP station in Ortonville shows William Edmonds crash into the building, rip the license plate off his truck and run away. (source: Oakland County Sheriff's Office)

William Edmonds accelerated rapidly in the parking lot of the BP gas station in the 1700 block of Ortonville Road around 2:30 a.m. Thursday. He told police he was attempting to spin around 180 degrees.

However, he hit the gas pump island and his truck careened into the convenience store. Surveillance video shows the truck plowing through the entry doors and stopping entirely inside the store.

Nobody was injured inside or outside the store, but displays inside were destroyed. Surveillance video inside the store shows Edmonds grab some papers from inside the truck, tear the license plate of the back and run away on foot.

Broken bottles of liquor later seeped into a floor outlet, causing some smoke under the pickup truck inside the store, according to the Oakland County Sheriff's Office. The Brandon Township Fire Department responded to investigate.

An employee inside the gas station recognized Edmonds as a regular customer. He told responding officers that Edmonds bought a beer, cracked it open and got into his truck before the crash.

The employee gave responding police officers a full description, according to the sheriff's office.

A K-9 team attempted to track Edmonds from the store, but lost his scent in the area of Glass and Michael streets in Ortonville.

Investigators periodically checked Edmonds' residence in Groveland Township. They arrested him there on Friday, about 13 hours after the crash.

Edmonds admitted to drinking beer and spinning his tires near the gas pumps because it was easy with his new tires. He told the sheriff's office that he didn't mean to hit the building or injure anyone.

He claimed that he got scared after the crash, so he ripped off his license plate and ran away.

The Oakland County Prosecutor's Office charged Edmonds with reckless driving and leaving the scene of an accident. He was released on a $5,000 personal bond, ordered not to visit the BP station and submit drug and alcohol tests twice a week.