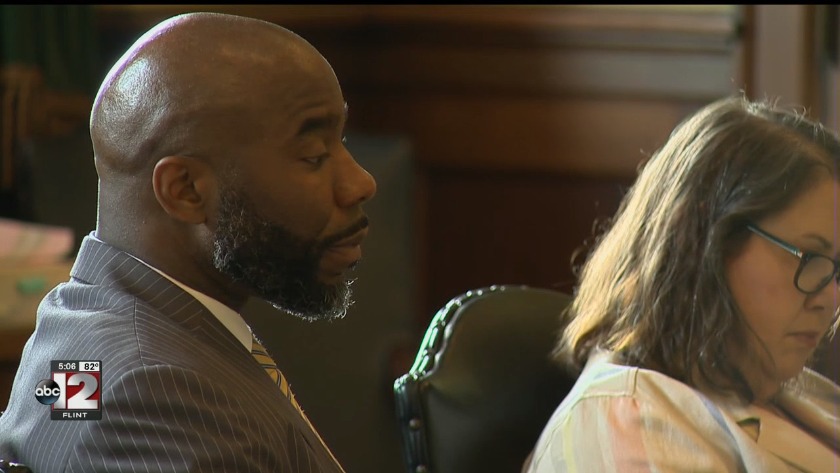 Witnesses take the stand in case against Mateen Cleaves

FLINT (WJRT) (8/8/2019) - Surveillance video from outside an alleged sexual assault involving former Michigan State University basketball star Mateen Cleaves was the focus of the first day of his trial.

Testimony in the Mateen Cleaves sexual assault trial began in a Flint courtroom. The case could last two weeks.

Cleaves, who is a Flint native, is facing five charges related to the September 2015 incident at the Knights Inn in Mundy Township. The court seated a 14-member jury on Wednesday consisting of four men and 10 women.

Thursday was the first day of testimony in the trial, which is expected to last two weeks with up to 30 witnesses. The video likely will be a key piece of evidence for the prosecution.

"She is pulling back from him. She even gets down like this to prevent being dragged back into the room. She is resisting him, pulling away from him, trying not to go back into the room with him," Lindsey said.

She said the alleged victim met Cleaves at a charity golf tournament, where she was volunteering that night. The woman and her boyfriend, Michael Bryant, accompanied Cleaves to a bar, where they got heavily intoxicated.

Bryant said the alleged victim left with Cleaves and he expected to meet up with them at the golf course, but he didn't see her for another few hours. Someone from the Knights Inn called to tell him about the assault.

"She was balled in a corner in a chair crying, visibly shaking and upset," Bryant said. "I tried to go over and calm her down. I went over to hug her. She pushed me away and she wanted me to be there. But she didn't want me anywhere around her."

He took the woman to her mom's house that night and she went to the hospital the next day.

Bryant said he received a text from Cleaves' phone and a call with nobody on the other end earlier in the night. Lindsey said the call came from Bryant's girlfriend, and Cleaves' defense attorney said the text came from Cleaves.

The man testified he didn't think much of it at the time.

Lindsey said the woman will admit to kissing Cleaves back, but she tried to stop it from going any further.

Bryant admitted that he didn't attempt to call his girlfriend, her friends or the police while she was with Cleaves.

A judge threw out the case in 2016, saying the victim's testimony wasn't credible. That ruling was overturned in 2017 by a judge in the higher courts.

Cleaves' defense attorney, Frank Manley, then took the case to the Michigan Supreme Court, asking it be thrown out again. The court refused, leading to this week's trial.

Manley argues the case boils down to consensual relations between two adults.

"Regret is not rape," he said. "Consensual sexual activity between two adults is not a crime."