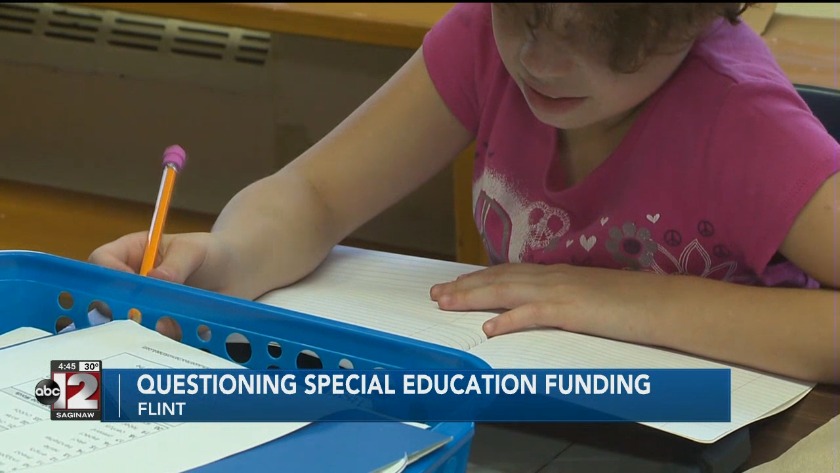 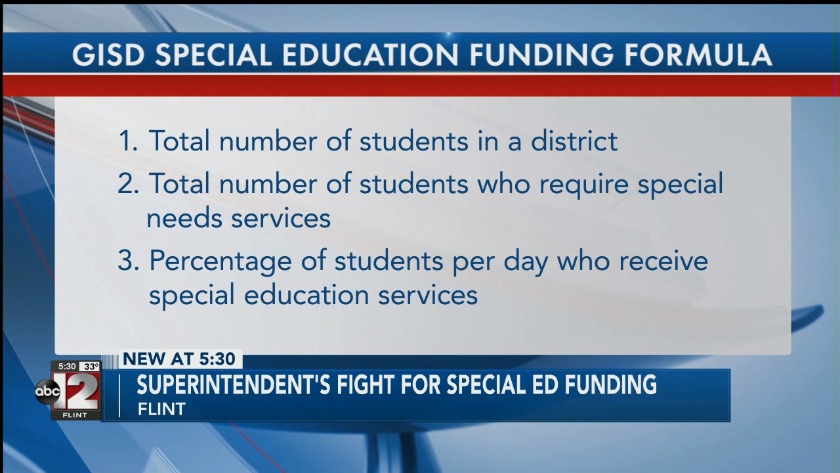 FLINT (WJRT) (2/10/2020) - As Flint Community Schools grapples with their future, the issue of special education funding has been at the forefront.

The superintendent said it's one of the main factors driving them into debt.

Superintendent Derrick Lopez said the state average of students who require special education services is 12%. But that number is more than double in Flint Community Schools at 24% to 26%.

With a higher than average special needs population, Lopez said they've been forced to pay $3.6 million from their general fund to cover those services. He said, the district is not getting enough from the state.

The funding provides special education services for students with needs that range from ADHD to dyslexia to cerebral palsy. The extra help needed varies. but on average Lopez said they require nearly double the amount of funding that a general education student would need.

He blames the funding issue on the Genesee Intermediate School District's formula, which decides how to dish out the money to each district.

These are the factors the Genesee Intermediate School District uses to determine how to dish out special education funding:

The funding policy has been in place for two decades. The GISD said the formula was agreed on by 21 superintendents and 14 school academies in 2001.

"The Flint Community Schools did benefit from that when we were in 2001 and we were 22,000 students. That's actually the truth, but we know the landscape of education has changed drastically in the last 20 years," Lopez said.

He wants only the third factor to be considered in the decision.

"The student body of a district is irrelevant to what the Act 18 formula was designed to do, which was to target special needs students and their needs in the districts," Lopez said.

He just filed a formal complaint about the formula with the state. It could take up to three months for an answer.

"And so my goal is, to actually update that formula and it's use," Lopez said.

But GISD Associate Superintendent Steve Tunnicliff said he's not aware of any formula in Michigan with just the third factor.

"It could incentivize the over identification of students in special education. And in terms of placement and programming, it may actually be counter the notion of providing a least restrictive environment for kids in terms of their educational placement and setting," he said.

If the formula is changed, Lopez said the extra funding will make a big difference in getting rid of the $5.7 million structural deficit hanging over the district.

More than half of that is money taken from the general fund to cover the cost of special education.

The large debt prompted the district to hold a number of meetings over the last several months, as school board members worked to find a way to cut costs.

Initially, closing four schools was on the table, but the school board refused to allow any closures. Members released a statement last month asking administrators to revisit the deficit elimination plan.

The announcement came after three public listening sessions, where an overwhelming majority of parents and community members spoke out against closing schools.

The latest listening session was postponed, because Lopez said he was filing this complaint. He added that closing any elementary schools is definitely off the table.

A final decision on closures won't be made anytime soon.

But if the school board decides to keep the buildings open, it would also have to prove to the state that it's finding other ways to get rid of debt.

Done with homework: More than 200 schools in UAE cancel it

Done with homework: More than 200 schools in UAE cancel it