Flushing is considering putting in a roundabout 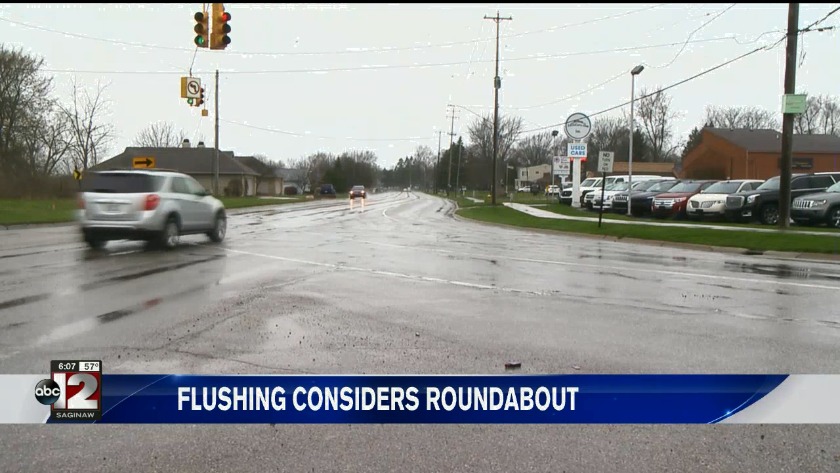 FLUSHING (WJRT) - (4/18/19) - Like them or loathe them, roundabouts change the way we deal with traffic at an intersection.

Another mid-Michigan community is considering one.

Round and around we go.

They slow down traffic without traffic lights.

Now Flushing is considering one at the intersection where West Pierson Rd. turns into East Main St. to the northwest and Flushing Rd. to the southeast.

Local businesses in the area have different opinions on, if one is needed.

"A roundabout out here, what are we going to do with that, there's only three roads, it's not four. And there's not any room out there for it, I think," said Lynetta Brumley at the Flushing Marathon Station.

"Right here, I don't know if we really have the big traffic count to, you know, get a roundabout," commented Tim Lloyd, Rumsey Insurance Sales Agent.

"The one, you know, street does not stop going the one way to Flint, and if you're not familiar with that, that could, you know, alleviate that problem. And then, you would be able to turn on from Flushing to Pierson Rd," added Sue Springsteen, Rumsey Insurance Owner.

According to Flushing City Manager Brad Barrett, there have been 23 crashes at that intersection between 2011 and 2015, which is why, from a safety standpoint, the roundabout could help.

MDOT grants would pay for the intersection reconstruction, which to date, has not yet been approved.

"I like them because it makes traffic go by faster. Where I used to live at there wasn't one, it like, made traffic slower," said Abraham Juarez, a Flint resident.

"I think roundabouts are ok. There's one over by the airport and that seems to work all right," added Springsteen.

A public comment input session will be held to discuss the merits of the roundabout on April 30th at the Swartz Creek Senior Center beginning at 6pm.