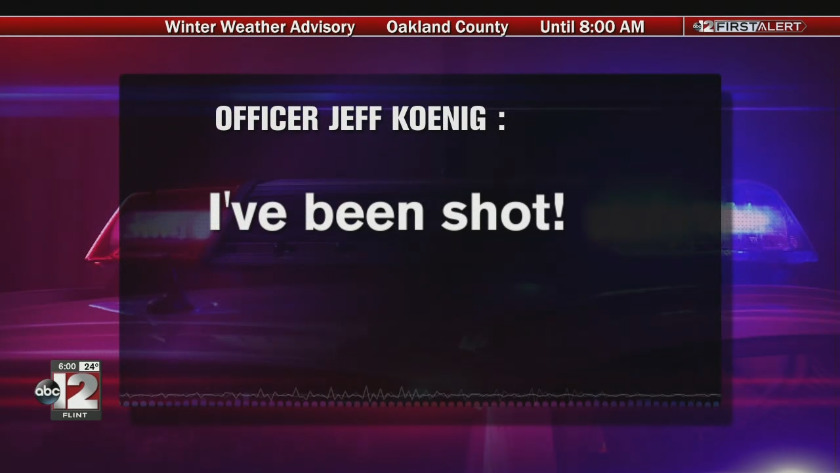 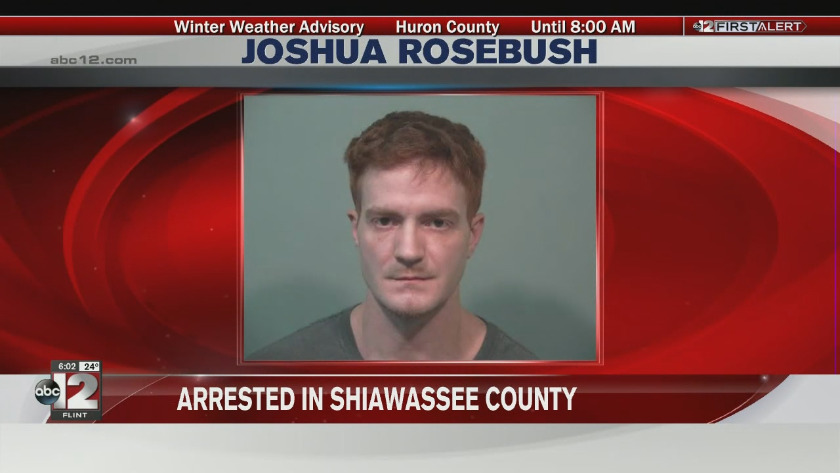 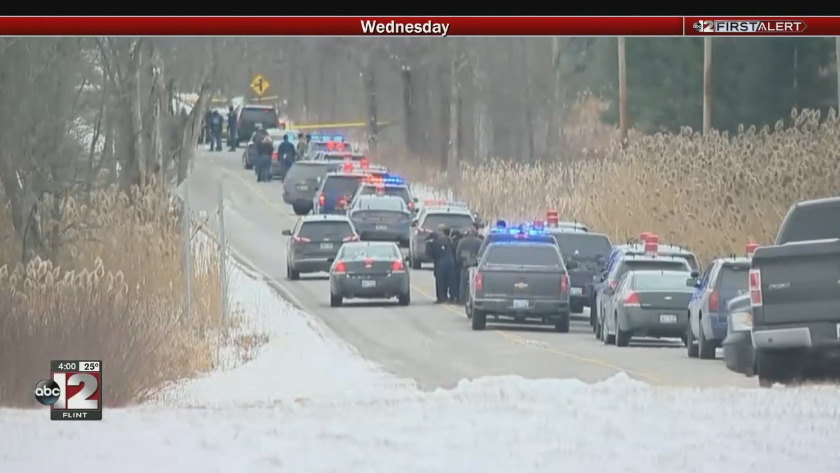 A first look at the Shiawassee County scene

SHIAWASSEE COUNTY (WJRT) (1/22/2019) - The suspect who allegedly shot a Saginaw Township police officer early Tuesday was arrested after a shootout with police about 11 hours later.

Police captured 29-year-old Joshua Rosebush in the area of Woodbury and Lansing roads in Shiawassee County's Woodhull Township around 1 p.m. He sustained undisclosed wounds after a shootout and is being treated at an area hospital.

Koenig, a 16-year veteran of the force, received gunshot wounds to his jaw and right upper arm. It was unclear whether he returned fire at Rosebush.

Despite the gunshot wound to his jaw, Koenig was able to give a description of Rosebush, his pickup truck and last known direction of travel through the nearby Cabela's parking lot. That got responding officers hot on Rosebush's trail.

Other officers loaded Koenig into a patrol car and rushed him to a Saginaw hospital, where he was listed in critical condition. Koenig later was airlifted to University of Michigan Medical Center in Ann Arbor for further treatment.

The pickup truck that Koenig described was found several hours later in a wooded area off Liberty Road in Kochville Township, just a couple of miles from the shooting scene.

After the shooting, Rosebush allegedly stole an AIS Construction Equipment pickup truck from the St. Charles area and dumped it outside the Home Depot store and Wendy's restaurant on Corunna Road in Flint Township.

Police in tactical gear swarmed a home near Linden Road and Lenrose Avenue north of Corunna Road after the truck was located at the Home Depot. At least one person was taken into custody there.

Police say Rosebush's whereabouts are unknown for about an hour after the pickup truck was located. He resurfaced when he allegedly stole a white 2006 Ford commercial van at the Speedway gas station on Bristol Road at I-475 in Burton.

Shiawassee County Sheriff Brian BeGole said all of his deputies were dispatched to the east side of the county to watch for Rosebush. A Shiawassee County sheriff detective spotted the van heading west on I-69 around 1 p.m.

The detective followed the van for a while on the freeway without attempting a traffic stop as backup units responded to assist. The detective trailed behind Rosebush to the Laingsburg exit off I-69.

BeGole said Rosebush got off the freeway, pulled out a gun, prompting the detective to return fire. Police from Lansing and Flint responded to the area to assist the detective, who was alone during the shootout.

Rosebush remained in custody while being treated for his injuries at an area hospital Tuesday afternoon. The detective was not hurt, but was shaken up by the tense encounter.

BeGole says they'll be meeting with him and his family this evening.

"This is what we train for and I'm thankful my detective was not injured and were glad to bring this to a close without anyone innocent getting hurt," he said.

RELATED: Saginaw Township police officer in critical condition after being shot in face

Koenig was listed in critical but stable condition Tuesday afternoon. He was airlifted from Covenant HealthCare in Saginaw to University of Michigan Medical Center in Ann Arbor for continued treatment.

Gov. Whitmer orders water reconnections during pandemic
Related Links
Related Stories
Comments are posted from viewers like you and do not always reflect the views of this station. powered by Disqus