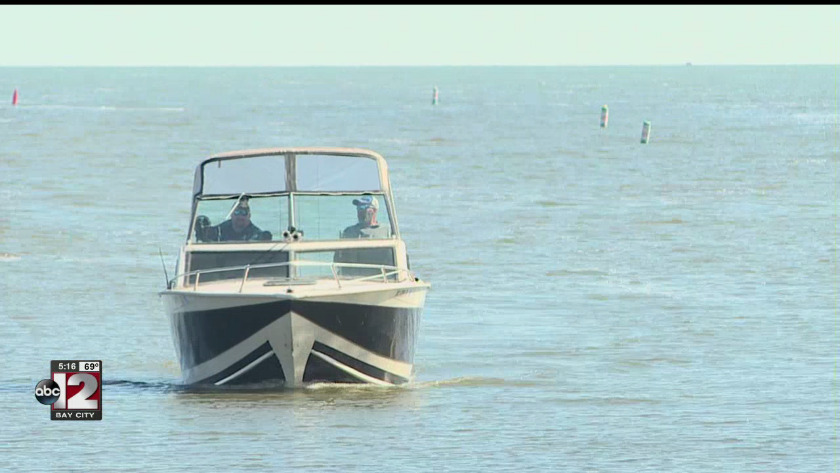 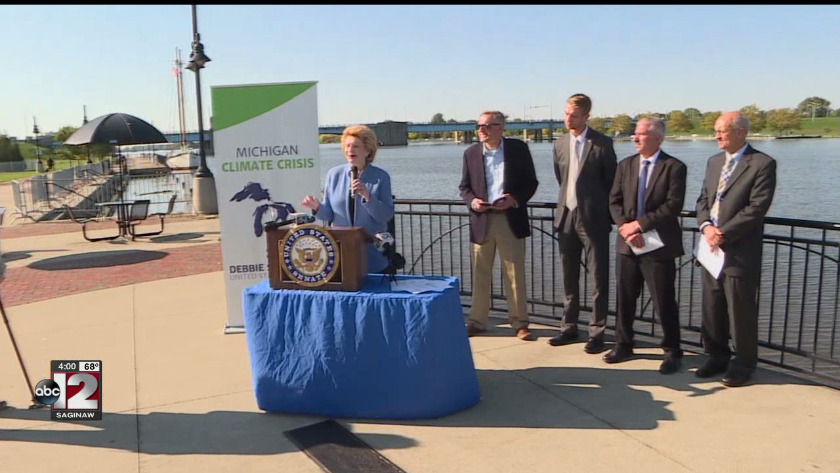 They were sounding the alarm about what they called our state's 'climate crisis'.

"On the one hand we have to have a sense of urgency to act, but not a sense of hopelessness," Sen. Stabenow explained.

The Democratic senator used Wenonah Park along the Saginaw River as a backdrop for the news conference. She was joined by leaders from the National Wildlife Federation and Trout Unlimited, as well as researches from Central Michigan University's Institute for Great Lakes Research, and the University of Michigan School for Environment and Sustainability.

High water levels are very visible at the park, and have been for a majority of the year. The water levels forced changes at this year's Rockin' the River event, as well as the Bay City Fireworks Festival.

The group also talked about problems that aren't as visible.

Ultimately that can impact fish reproduction.

"Is it accepted as the new normal? Or is it just that people are not making the connection or don't believe there's a connection," asked Dr. Don Uzarski, director of the CMU Institute for Great Lakes Research.

And while they agree ups and downs happen, it's the extreme flucuations that have them concerned.

"Our hunting and fishing are in jeopardy, the Great Lakes are in jeopardy, our way of life in Michigan is in jeopardy if we don't have a sense of urgency about slowing and ultimately eliminating carbon pollution," Sen. Stabenow said.

She urges people to hold their elected officials on the local, national and federal levels accountable for best practices. Sen. Stabenow also asks people to do their part with things like driving electric cars, recycling, and other efforts to reduce carbon emissions.

Sen. Stabenow, who grew up in Clare County, said she's concerned for the future of her grandchildren. "We better get serious about what's happening carbon pollution, and the resulting climate crisis, or they're not going to have the same opportunities and the same future that I have had living in Michigan and the blessings of what's all around us and our way of life."

While not everyone agrees on climate change, most agree we've seen some extreme ups and downs in recent years.

For some local businesses that has meant weathering the ups and downs.

Scott Szafranski, operations manager at Linwood Beach Marina, said he's seen a little bit of everything in his 13 years along the Saginaw Bay. "2007 until 2012 we were dealing with low water levels, and wondering if we were ever going to get it back. And now we're in a situation where you know, stop it."

Fast-forward a few years and it's a bit different.

"Last couple years just an increase in water depth, and that's what really turned into a concern for us," Szafranski said.

Especially when the wind blows in a specific direction. "Our northeast wind events have become a little bit more intense, don't really know what to attribute that too."

Szafranski said they're built up pretty well here, but there has been some minor flooding in spots.

Instead, their main issue has been the docks. "We once had a floating gas dock, we had to remove that, you know, because the water was so high," Szafranski said.

As far as fishing goes, Szafranski said anglers are still reeling in walleye and perch, despite the on-shore changes.

"We're just adapting to increased water levels and that's about it. As far as affecting the quality of our fishery, not really seeing it at this point," Szafranski said.

Right now to prepare for winter and ice they are raising the fixed docks well above the current water level. That way if the Saginaw Bay freezes the docks will have a better chance of not being damaged.

Private campgrounds reopen with booming business
Related Links
Comments are posted from viewers like you and do not always reflect the views of this station. powered by Disqus