Slick roads cause many accidents the past few days 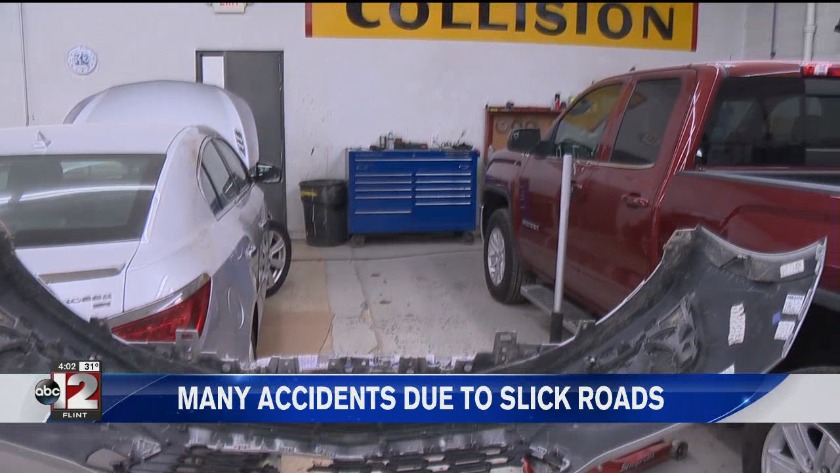 Snow plow operators finally get back to work

Slick road cause many accidents the past few days

The issue? Up to 5" inches of snow the past couple of days.

All of these accidents means extra business for auto repair shops.

Overall, it may take a few days longer to get repairs than even just a week ago, due to the sudden surge of vehicles entering auto shops.

In order to fix vehicles, you need parts.

One delivery driver said business has picked up since the weather got colder.

"Definitely, a lot of new and after-market parts. A lot of vehicles, if they're not totaled, you know, they're going to fix them," commented LKQ Auto Parts Driver Tyler Farnsworth.

A lot also depends on the amount of damage and what is needed to put a vehicle back on the road.

"Sometimes trucking can be delayed a little bit, but with our vendors that we utilize, we utilize a lot of vendors that can still come to us about two to three times a day.," Winslow added.

You many have also noticed a lot more trucks with their blades on.

It's what a lot of folks who shovel commercially have been waiting for.

The sound of sharp blades on pavement is music to the ears of private snow removal companies.

"Oh man. It's finally great. Because, I mean, usually, you know, you're making pretty good money. But, this year, it's been kind of slow," said private contractor Robert Bouvier from Burton.

It's not been a good year so far.

And that's put some contractors, like Smokey Moulton, owner of Smokey's Services Systems in the hole for the season.

"You got a lot of money tied up in maintenance and whatever. We got a big salt truck we salt with, and I'm not going to make what I'm paying this year, just repairing that thing."

Speaking of salt, Thursday and Friday's snow sent contractors to pick up loads of it, even multiple trips in the same day.

"It's nice. Go a long time with no snow, get a bunch at once, get some hours in, you know. Put some more food on the table," commented Tim Hillier, a driver for Great Lakes Landcare.

Some plow drivers have already put in long hours.

"A lot of seat time. Back's hurting, neck's hurting, but, a lot of the commercial sites you got to be wary of everything going on around you. But, we'll take everything we can get at this point," said Jason Lockwood, owner of Lockwood Lawn & Snow.

And the snow isn't over yet.

Another system over the weekend could mean even more work for plow operators.

First weekend of spring to end with some light snow

First weekend of spring to end with some light snow