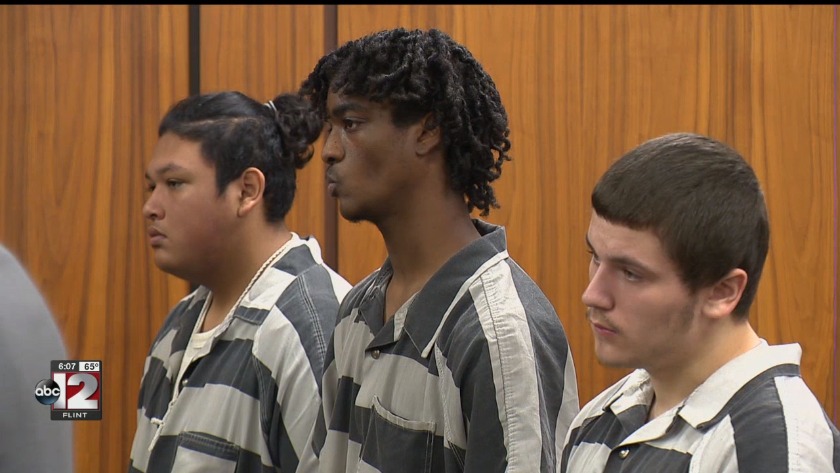 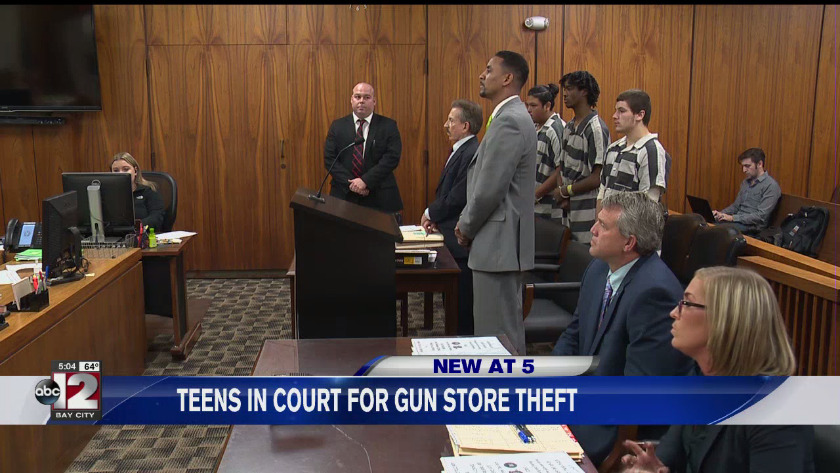 Remy Delgado, Travontis Miller and Preston O'Leary were all 17-years-old at the time of the Aug. 2 break-in and theft at Showtime Guns & Ammo, 3261 Bay Road.

They are charged as adults. O'Leary has since turned 18.

As ABC12 reported in August when they were arrested, Delgado and O'Leary were members of the Heritage High School football team at the time of the heist. The superintendent of Saginaw Township Community Schools previously said the teens had been removed from the team.

Delgado, Miller and O'Leary were in court for a preliminary exam. It's a chance for the prosecution to prove to a judge there's enough evidence to move the case up to Circuit Court for a possible trial.

But before hearing any testimony the lawyers for the teens told the judge they had decided to waive their right for the exam. As a result, their cases automatically move up to Circuit Court.

If convicted of the most serious of the 15 crimes they are charged with the trio faces up to 10 years in prison.

Altogether they are accused of stealing 49 guns from the store. Investigators report only six of them have been recovered so far.

It's an issue Saginaw County Assistant Prosecutor Melissa Hoover raised when the lawyers for the teens asked Judge Elian Fitchner to lower their $250,000 bonds.

"No further firearms from this incident have been recovered, nor have we received any further information as to where they might be. So they are still out there, potentially could be moved if the defendants were to get out at this time," Hoover said.

Judge Fitchner did not lower their bond.

Delgado, Miller and O'Leary are just three of the eight people linked to the crime.

Investigators have linked two 16-year-olds to the break-in and theft. Those teens, who were also part of the football team, have not been charged at this point.

In addition, Juan Martinez Jr., David Villegas and Leonard Dunbar have been charged.

Martinez, 25, and Villegas, 19, face multiple felonies each for acquiring and selling some of the stolen firearms after the break-in.

Martinez is undergoing testing to see if he's mentally competent to stand trial.

Dunbar, 57, who is Miller's grandfather, faces two charges for having stolen guns at his home. His case is already in Circuit Court.

A joint investigation by the Michigan State Police/Bureau of Alcohol, Tobacco, Firearms and Explosives Violent Crime Taskforce, the Bay Area Narcotics Enforcement Team, Major Crimes Unit detectives from the Michigan State Police, and the Saginaw Township Police Department lead to the arrest of those involved. Currently, MSP are handling the case in the courts.

If you have any information about the case call D/Sgt. Jim Bush at (231) 250-9471, or the ATF Tip Line at 1-800-ATF-Guns. Information can also be sent to ATFTips@atf.gov, through ATF's website at www.atf.gov/contact/atftips or submitted anonymously using the Reportit® app or by visiting www.reportit.com.