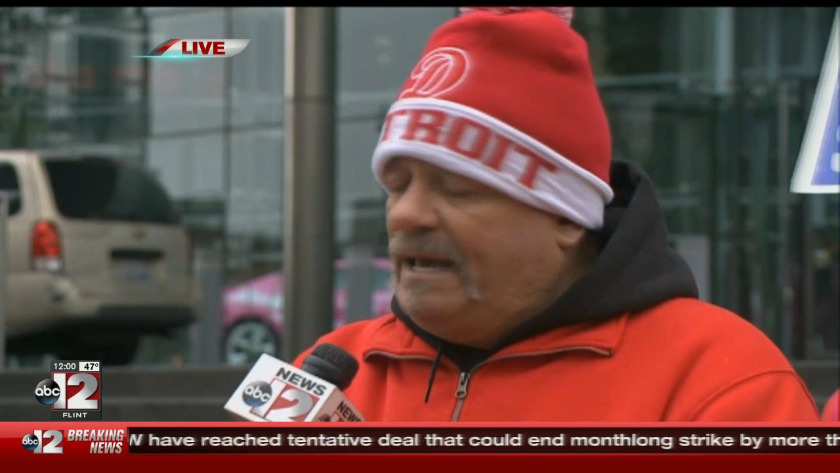 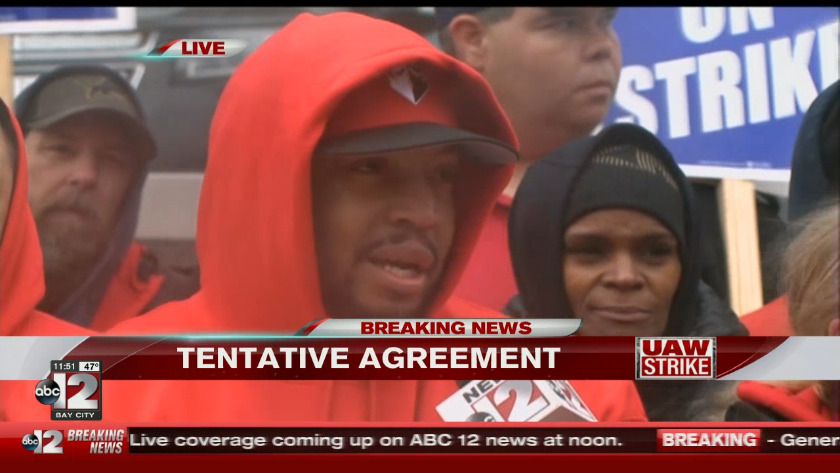 DETROIT (AP) (10/16/2019) - The United Auto Workers and General Motors have reached a tentative contract agreement that could end a monthlong strike that brought the automaker's U.S. factories to a standstill.

A General Motors worker pickets in front of the Flint manufacturing complex.

General Motors and the UAW both issued statements around midday on Thursday announcing the deal. They did not confirm any terms or details of what the agreement includes.

However, the union says the deal "achieved major wins" for its nearly 49,000 members at GM. They were seeking better wages, health insurance, profit sharing, job security and a path for temporary workers to obtain full-time jobs.

Strikers are likely to stay on the picket lines at least a few more days until union committees vote on the deal. The entire membership also must vote.

A statement from the UAW says the elected national negotiation team voted to recommend the UAW-GM National Council accept the agreement.

The National Council, which includes local union presidents and chairmen from GM facilities across the country, is scheduled to convene in Detroit on Thursday morning. The council has to approve the deal before presenting it to union members for final ratification.

RELATED: With tentative deal in UAW-GM strike, see what happens next

The council also will decide on Thursday whether to continue the strike until the agreement is officially ratified or allow workers to return to their jobs.

“The number one priority of the national negotiation team has been to secure a strong and fair contract that our members deserve,” Dittes said.

He reiterated the union's appreciation for community members who helped members on strike over the past month, striking workers who made sacrifices and their families.

“As we await the Council’s decision, please know that the outpouring of community and national support will be etched in the memories of all of us at the UAW for years to come,” Dittes said.

UAW President Gary Jones said members showed what the union is all about during the strike with their "dignity, grace and solidarity."

“Our more than 48,000 members standing their ground have captured the hearts and minds of people across this country," he said. "I could not be prouder of our brothers and sisters, our National Negotiators, and the National Council as they continue to fight one day longer to secure the best deal for our members.”

Many UAW members on picket lines in Detroit, Flint and Saginaw were relieved to hear about the tentative agreement, but reserving judgment on it until union officials outline the key details.

"Morale is up and usual. People are happy about it," he said. "We'll get more details on it tomorrow in Detroit."

Charon Brown, who works at GM's Flint Assembly plant, was picketing outside the Renaissance Center in Detroit with dozens of other UAW members when news of the tentative agreement came down.

"I'm happy. I was looking forward to it. I didn't expect it to happen today, but I'm happy nonetheless," he said.

Like most UAW members, he is most concerned about what the proposed contract includes for wages, health benefits, job security and providing a path for temporary workers to get full-time jobs.

"I'm looking forward to seeing what's in it and hearing more about it," Brown said.

Sean Crawford, who was picketing outside the Flint manufacturing complex, hopes the new contract makes all union members at GM equal, especially the temporary workers.

"I'm not looking to get a raise myself personally and I don't think many of us are. What we want is equality for the temporary workers who have been suffering for four or five or six years -- some of them under precarious working conditions," he said. "We want justice for the temporary workers. We want equality for the Tier II workers and also for our Aramark brothers and sisters who are out on strike with us right now."

Crawford hopes the tentative contract is a win for workers and helps the organized labor movement spread when people see what solidarity can bring workers.

"It doesn't matter if you're an auto worker, a teacher or a fast food worker. Everyone who works for a living deserves a union and rights on the job," he said.

On July 16, contract talks to negotiate a new four-year collective bargaining agreement began between GM and the UAW. The union went on strike two months later on Sept. 16.

Nearly 49,000 workers walked off the job, idling dozens of GM factories and warehouses across North America.

Just one day into the strike, GM stopped paying for health insurance for workers. UAW members received their last paycheck from GM on Sept. 20 and began picking up their first $250 strike pay checks on Sept. 30.

The UAW rejected the latest offer from GM on Oct. 6 and GM made a counteroffer the following day. GM CEO Mary Barra joined negotiations with top GM and UAW officials on Oct 9.

The company issued a statement on Oct. 11 calling for an end to the strike. The union shot back with a fiery statement calling into question GM's motives during negotiations.

UAW members got a slight increase in strike pay up to $275 and the union also granted permission for members to seek part-time jobs.

The first word of a possible deal came Monday evening, when the union publicized details of Thursday's meeting. No tentative deal has been announced, but sources say the meeting is a very good sign that one may be close.

The number one priority of the national negotiation team has been to secure a strong and fair contract that our members deserve,” said UAW Vice President Terry Dittes, Director of the UAW GM Department.

Out of respect for our members, we will refrain from commenting on the details until the UAW GM leaders gather together and receive all details.