UAW remains solid amid war of words with GM: 'One day stronger, one day longer' 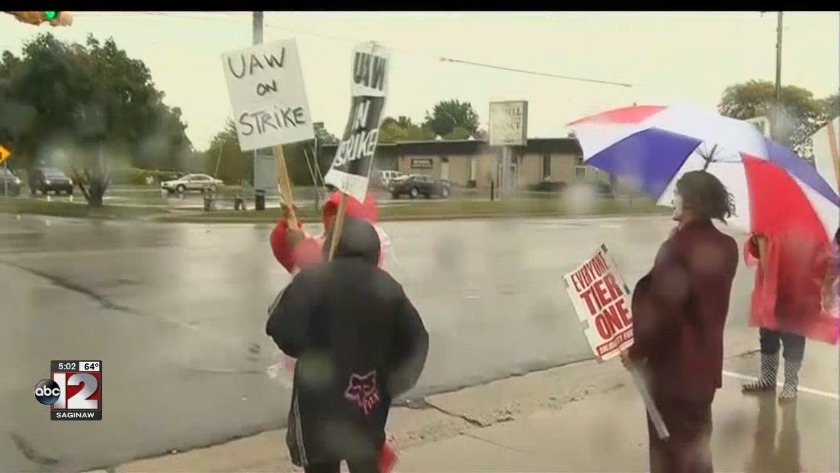 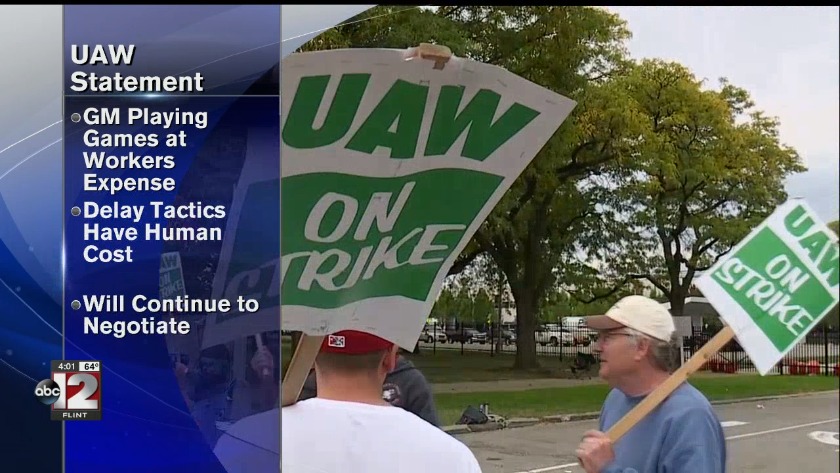 FLINT (WJRT) (10/11/2019) - General Motors and the United Auto Workers are pointing fingers and blaming each other for the length of the strike, which has now reached 26 days.

UAW members picket outside a General Motors facility in Swartz Creek on the first day of a nationwide strike.

The strike is now the second longest in GM history, only behind a 67-day strike in 1970.

Both sides have dug in, as negotiations continue behind the scenes. While some issues have been resolved, there has yet to be a proposal both sides can agree on.

That has striking workers worried but hopeful for a settlement soon.

Newer workers and temporary employees are taking the events hardest, but UAW members say they remain steadfast in solidarity and will continue the strike as long as necessary to reach a satisfactory deal.

Courtney Jarrad, a trustee for UAW Local 659, said the union remains as strong and stubborn as ever. She said members go by a mantra of "one day stronger, one day longer."

"I don't know how close we are to a deal. We don't get a lot of that info back here right away. But I do know that our people are strong," Jarrad said.

Community support remains strong. Picketers still have lots of energy like the first week of the strike and motorists continue honking or showing support in other ways.

The UAW Local 659 has more than 300 care packages for striking employees on hand courtesy of the United Way's generous contribution of $20,000 a week to the Food Bank of Eastern Michigan, who assembled boxes of food.
The boxes will be distributed when union members pick up their next strike pay checks.

The packages include toiletries, bottled water and nonperishable food items. Diapers and baby supplies also are available for families who need them.

The United Auto Workers issued a statement calling on General Motors to stop trying to "play games" during the 26-day strike and negotiate in good faith.

The UAW statement released at midday Friday says the company "has not taken the issue of our more than 48,000 members seriously." The union says GM has tried to "undermine" its efforts before and during the strike.

"The company’s strategy from day one has been to play games at the expense of the workers," the UAW statement says.

It accuses GM of releasing "half-truths," taking away workers' health insurance and reverting to previous proposals the union has rejected during negotiations.

"Our members are ready to get back to work, but GM is purposefully stalling the process to starve UAW-GM workers off the picket lines to protect millions of dollars of corporate bonuses," the UAW says.

GM issued a statement earlier Friday saying it wants to reach a fair and worthy agreement to end the strike and believes its latest offer handed to the UAW on Monday achieved "mutual objectives."

GM says its offer also promises billions of dollars worth of investment in U.S. facilities, creating thousands of new jobs. Temporary GM workers would get a clear path to permanent jobs and a ratification bonus.

"We have advised the Union that it’s critical that we get back to producing quality vehicles for our customers," GM's letter says. "We are committed to the collective bargaining process, and we are committed to our future together."